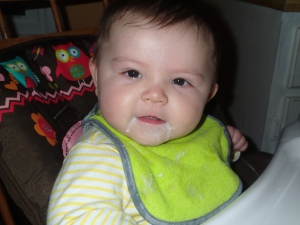 I recently used my baby daughter’s feeding habits to describe my walk with God. I talked about milk and how good it is. And last night, Annabelle showed me just how good that milk really is. My husband held her in his arms and gave her the bottle. Eyes half closed, she kneaded the air pausing occasionally to rub my husband’s belly. Milk dribbled down the side of her mouth to her chin. And she was the picture of contentment. For she was in delectable heaven.

I’ve noticed something else about Annabelle recently, though. It has to do with the solids I’ve offered. Some, she gobbles up. With others, her nose turns up as if the taste is awful. Pears, good. Prunes, no good. Apples, yummy. Peaches all come back up. And as I try to feed her these solids, she sometimes rejects them outright. Especially if she sees her bottle nearby. It’s pretty clear her preference. It’s the milk. That milk goes down easy. Oh, mama, is it good! 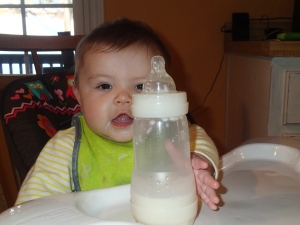 Brothers, I was not able to speak to you as spiritual people but as people of the flesh, as babies in Christ. I fed you milk, not solid food, because you were not yet able to receive it. In fact, you are still not able, because you are still fleshly. 1 Corinthians 3:1-3

As usual, Annabelle provides a picture for me. It has to do with God’s word and the teachings of His Son. See, some of God’s words go down easy. Like milk. God loves me. Good. I am forgiven. Yummy. He’s preparing a place for me. Give me more because oh, mama, is it good! But then there are other words. Last is first and first is last. My nose scrunches up because that one doesn’t taste so good. Love your enemies. Well, that one comes right back up. Just like peaches. Put off the old man. That saying cuts a little. In fact, I have to gnaw on that one some before it goes down. Because in past feedings, I’ve rejected it outright in favor of milk. See, milk goes down easier. You get the picture.

So get rid of all evil behavior. Be done with all deceit, hypocrisy, jealousy, and all unkind speech. Like newborn babies, you must crave pure spiritual milk so that you will grow into a full experience of salvation. Cry out for this nourishment, now that you have had a taste of the Lord’s kindness. 1 Peter 2:1-3

Just this week, Levi said something interesting. “In nine years I’ll be an adult.” Well, first off he’s calculated wrong because he won’t be old enough to vote for another ten years. But I know the point he was trying to make. And this morning he advised me when he’s twelve, he can drink coffee. It’s obvious my son is eager to grow up. Just the same as I was at his age. What I find interesting about his words, though, is his equating age to adulthood. My reply? “Just because you’re eighteen doesn’t mean you’re an adult. In fact, I know some forty year olds who are still children. And to the contrary, I’m sure there are some fifteen year olds who are adults.” I’m not sure if he understood my point. The point being maturity.

And so, as I enter my eighteenth year as God’s child, I realize spiritual maturity has nothing to do with how long one has been a Christian. Not a thing. It has more to do with how developed one’s insides are. And that happens only by walking with God. It happens when you sit at the feet of Jesus. The irony I find this morning, though, is that in the earthly world children are eager to grow up. But as for the spiritual realm, we can be a little more reluctant. Because it’s hard. Spiritually maturing actually takes work. We prefer to stay babies. We prefer to stay on milk and keep a child’s view. Milk not solids. Our thinking… the world revolves around me. It’s all about me. And milk can give us that. It’s comforting.

Eighteen years ago I prayed a prayer. It was surface. Skin deep. More outer than inner. And what prompted that prayer was something I saw on a woman’s face as she sang. Truth is, she radiated. Her face was lit up like the sun. Frankly, she had something I wanted. Like a child, I thought “give me, give me.” I wanted to make what she had mine. And so, I uttered a prayer. Imagine my surprise when my face stayed the same. Dark instead of light. For years and years. But back then, I didn’t know what I know today…

As the men watched, Jesus’ appearance was transformed so that his face shone like the sun, and his clothes became as white as light. Matthew 17:2

Jesus took a few guys up a mountain with Him. And right before their very eyes, He transfigured. Transformation occurred that couldn’t be explained by ordinary means. Recently I learned that the word used for transfigured occurs only four times in the Bible. Twice describing this mountaintop event. And once in a verse I’ve heard preached more times than I can count. “Do not be conformed to this world but be transformed by the renewing of your mind…” That’s Romans 12:2.

That tells me the type of transformation that took place with Jesus can take place with me, also. My face can be lit up like the sun. It can radiate. But the fact of the matter is, this transfiguration takes some work. It’s a supernatural work that occurs over time. It happens as we spiritually mature. When we leave milk behind and move on to solids, we grow in Him. And as we develop, our childlike “me, me” attitude begins to diminish and fade. We lose the hold on our lives in favor of something greater. Something more. And before we know it, we start to decrease as He begins to increase. Inside us. This is when we begin to shine.

My children, again I am in the pains of childbirth for you until Christ is formed in you. Galatians 4:19 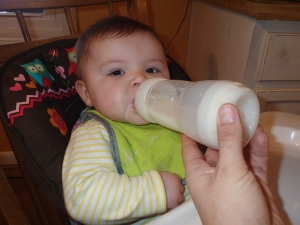 I’ve been a child for so long. At least spiritually. I’ve held to my “me, me” attitude. And the truth is, I’m just like Annabelle. I’ve preferred His milk. It goes down so easy. But as I said once before, I’ve been cutting teeth. I’ve been gnawing on His harder words. Gumming them until they become more palatable. For a couple of years now, I’ve been chewing on the meat. Eventually, I’ll swallow it down. And when I do, I’ll find nourishment by which I’ll grow. I’ll mature as I savor the flavor of the meatier words. Over time, I’ll transform. I’ll begin to resemble Him. God’s Firstborn. And before I know it, I’ll begin to shine. Like the woman I saw eighteen years ago. No doubt, she was His daughter. A fully grown, spiritually mature woman. Surely she had been well-fed on heaping helpings of God’s meat. For she shone. Just like the sun.

We all, with unveiled faces, are reflecting the glory of the Lord and are being transformed from glory to glory. 2 Corinthians 3:18