The Son is the image of the invisible God, the firstborn over all creation. Colossians 1:15 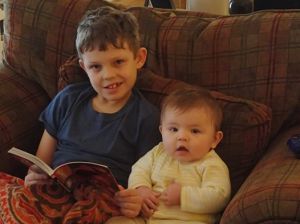 My babies are miracles to behold. A little bit of me, a little bit of Jason, and voila… a new creation. My firstborn, a boy child. And from the very start, he captured my heart. My last, a little girl. Equally as captivating. And through these mini me’s… I see my story unfold. By their names, their countenances and attitudes, their upsets and milestones, the real story of God & me comes to life before my eyes. Through them, I see me… 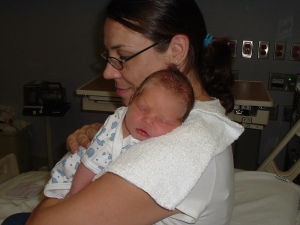 His name means “joined to.” Or attached. And his very name encapsulates everything about my early journey with God. It began when I said a prayer eighteen years ago and immediately set to work. See, I began working for a God I didn’t know at all. And as the years progressed, I became more and more attached to the outward signs of my sacrifice. For in my mind, it was the visible, the tangible, that validated me. If I worked hard, then I would be rewarded. And my prize would be something I could put my hands on. That was it for me. My hands. Working hands. Proof of how good I was.

And so, I embraced the old covenant whole heartedly. I attached myself to rules and regulations. Bound by law, I joined myself to the church building and all its activities. Tethered more to a religion than to the God who formed me. And so, as time marched on, I marched all the more. I offered up one empty sacrifice after another hoping that one day they would fill me. That one day, I would really be changed. But the harder I worked, the more bitter I became. And the more I judged. Oh, you know what I mean. I think we’ve all heard it… “10% of the people do 100% of the work.” That became my mantra. I wore it on my chest like a badge of honor. Because I was a worker. A hard worker. I made my daily sacrifices at the temple. I was a good Christian. And those who didn’t do what I did, well, they just didn’t measure up. They fell into that 90% category.

And so, the fruit of my labor was fear. Because when Levi came, I thought he was a gift from God. A reward for all that stuff I thought I should be doing. And over time, God gave me a place of my own. My homeland. And because of my actions, I thought for sure He was rewarding me once more. See… I was being such a good girl. At least outwardly. No one could fault me. No sir. My sacrifices were in plain view for all to see. And so, if I slackened my pace, I worried. Would God punish me? If I didn’t work hard enough, would He take what was given?

And so went my life. For the first fifteen years of my Christian journey. Until one night, I had a dream. It was in February of 2013 when I heard God’s word. As I slumbered, Matthew 9:13 settled in my ear: “Go and learn what this means; I desire mercy and not sacrifice.” And as fate, or God, would have it… turns out that’s exactly what I did. I went. And I learned. My children teaching me the most. 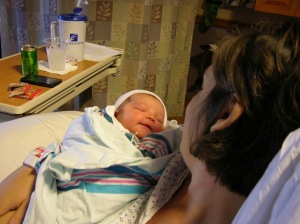 Her name is Annabelle. I selected it because it means joy. And in truth, she represents the age of grace that was ushered into my life at the time of her conception. See, I became pregnant at a pivotal moment in time… fertilization occurred after a two-year long in depth spiritual exam. New life in my body in more ways than one. For it was the Fall of 2013 when I felt a sense of peace. Of joy. Of contentment. And closure. And those feelings had everything to do with my past. And everything to do with my future. And the crucial moment that hinged the two.

And so, finally, the cross did a work in my heart. Finally, I understood what He wanted me to know. Mercy and not sacrifice. And that’s when my belongings released their hold on me. Or more accurately, I released my grip on them. Because I was no longer possessed by my possessions. For when the era of mercy graced my life, I found I was attached to this world no more. A stranger in a strange land. Because God Himself became my portion… my inheritance. For the first time I realized He would not give and take away based on a reward system. Fear that God would strike my kids as a form of punishment diminished in the light of His unconditional love. And so finally, after too many years, I came to know my Creator as a loving Father instead of a strict slave master. Finally.

Every generous act and every perfect gift is from above, coming down from the Father of lights; with Him there is no variation or shadow cast by turning. By His own choice, He gave us a new birth by the message of truth so that we would be the firstfruits of His creatures. James 1:17-18

For so long, I wondered why there was no change in me. See, I prayed a prayer in February of 1997. But nothing magic took place. There wasn’t this overnight miracle. Instead, I seemed to get worse. As time wore on, I became increasingly bitter and nasty and resentful. Oh, on the outside, I looked good. But inside… rotten. I festered away.

And so, despite knowing something was incredibly wrong, I kept going. Spurred on by select Bible verses and little knowledge. Misinterpreting Scripture on more than one occasion. Incited by a sermon I heard from more than one pulpit, “You’re known by your fruit!”  Well, obviously, I wasn’t producing the right fruit! Surely I wasn’t working hard enough. Because I was the same woman fifteen years later. And so, I lumbered on. I slapped on my badge of honor. Serve! Work! Let your light shine so your works glorify God in heaven! I tried to do all this. And I tried again. I worked so hard. Until one day, I just stopped. I knew there had to be something more. There just had to be. And turns out there was. For it’s just as He says… He desires mercy. Not sacrifice. I just had to learn it.

Doesn’t it stand to reason, then, that if we sit still long enough, an outer work will happen anyway? In time? Surely as God’s fruit develops and ripens within us, it’ll eventually make its way to the surface. To our eyes and mouths, His fruit blossoming and blooming on our very countenances? And yes, fruit yielded through our own hands. But not by our feeble attempts. Or by empty works. Instead, a bounty of fruit that begins deep inside us until it flourishes and heaps over the vessels that we are.

But the fruit of the Spirit is love, joy, peace, forbearance, kindness, goodness, faithfulness, gentleness and self-control. Against such things there is no law. Galatians 5:22-23

Yes, it’s true… my babies are miracles to behold. They teach me so much about myself. And through them, I’ve learned about God. About who He is. And as I stand back and look at the big picture, I am awed at how He put this all together. How through the precious faces of my offspring, the fruit of my loins, He gives me a picture of myself… the fruit of His loins. And through my children, I know without a shadow of a doubt how much He loves me. I know it. See, His firstborn was a Son. He was the firstborn over all creation. And then, He had more children. His firstfruits. As many as the stars. For His offspring is like the dust of the earth… if one could count the dust.

Her sons rise up and call her blessed. Her husband also praises her: “Many women are capable, but you surpass them all!” Charm is deceptive and beauty is fleeting, but a woman who fears the LORD will be praised. Give her the reward of her labor (the fruit of her hands), and let her works praise her at the city gates. Proverbs 31:28-31