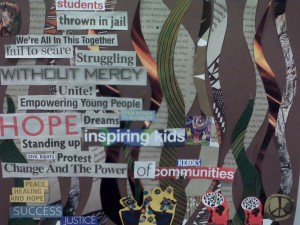 It’s been said that ignorance is bliss. And what you don’t know can’t hurt you, right? Or how about this one… “I’m from Virginia! I don’t know anything!” Most of you are familiar with the first two phrases, I’m sure, but since I coined the last expression, it may be new to you. Yep, this last truism encapsulates me. I am surely from a small town in Virginia. And there’s no mistaking it, I don’t know anything. At least about cities and places beyond my borders. See, I live in a small town. And I work from home. So I am far removed from the harsher realities that inner city life can afford its inhabitants. I have been sheltered from that lifestyle… it’s something I do not know.

Last night, I was captivated by a movie called Freedom Writers. Its theme goes hand in hand with all that I’ve been stewing on lately. And the story happens to be based on true events. See, Erin Gruwell was a brand-new teacher and her first job landed her in a classroom filled with low-performing students. A privileged woman with a college degree was deposited smack in the middle of room 203, completely engulfed by racial tension, violence, and gang activity. And at first, she felt ill-equipped for the task at hand. Because basically, in my mind, I see a woman “from Newport Beach, and she didn’t know anything!” Because the reality of that classroom had to have been far different from anything she had ever imagined. Her smile was removed from her countenance as she realized these fourteen and fifteen year olds had experienced a very dark side of life. One she had never known… Abuse. Drugs. Homelessness. Drive-bys. Death. Incarcerations. Suicides. Immigration. And not only did this teacher meet with resistance from the kids, the school system itself was a deterrent. It was as if the school had already given up on them. They were freshmen, but their skills were not much beyond a fifth grade level. The goal was to usher them through the school as painlessly as possible.

Rather than turn the other direction in fear, this woman dug in and persevered. And rather than give up on these hopeless kids, she became a drink offering in that she poured out her life into theirs. When the school refused to give the students new books, she worked additional jobs so that she could purchase them. When the school resisted field trips, she made the way. This teacher gave them all that she could, and offered them experiences beyond their wildest expectations. One of the most amazing things Erin Gruwell did was to use books the kids could identify with, such as The Diary of Anne Frank. In opening their eyes to the struggle of a young Jewish girl who lived fifty years earlier, the kids saw a bit of themselves within her and they were finally able to make the connection with the other people sitting next to them in the classroom. By the teacher’s leading, the kids were able to take down the invisible barriers that separated them, and identify with each other. And this was a remarkable feat in that the kids from birth were conditioned to stick with their own and to take care of their own, even if that meant lying or killing.

Erin Gruwell encouraged the troubled kids to write about their adversity. Through her leadership, the students realized that each one had something important to say. And they realized their potential as they began to write, each one finding their voice. Through a project, the kids put together a book composed of the journal entries to tell the story of their lives. So that even if no one else read it, they themselves would never forget. We can all read about their struggles, as a book called The Freedom Writer’s Diary was published in 1999. Pretty amazing, huh? Because there was no hope for these kids… these outcasts… these gangsters… these trouble makers. Before that teacher came on the scene, these students were not expected to be successful. But they did make it. Some of them were the first in their families to graduate. And most, if not all of them, went to college. All because of a woman named Erin Gruwell, who was not afraid to step up for something she believed in. All because of a woman – who at first didn’t know anything – dared to lead them. And that’s exactly what they needed… someone to follow.

I have to share a few of the speeches. My hope is that you’ll feel as inspired as I am. The first came from Miep Gies, the woman who hid Anne Frank during the holocaust. After one of the students told her that she was his hero, she replied, “No, no – I am not a hero. I did what I had to do because it was the right thing to do. That is all. We are all ordinary people. But even an ordinary secretary or housewife or teenager can within their own small ways turn on a small light in a dark room, yeah?” And later, through a heated discussion, Erin defends her passion. She said that she hadn’t planned on becoming responsible for the kids. And when she heard, “Their not your kids, and who asked you to?” Her response was, “Why do I have to be asked?” She expounded, “I finally realize what I’m supposed to be doing and I love it. When I’m helping these kids make sense of their lives, everything about my life makes sense to me. How often does a person get that?” And finally, when she cried to her father because of uncertainty, he told her, “What you’ve done with these kids, I don’t even have words for it. But one thing’s for sure, you are an amazing teacher… you have been blessed with a burden, my daughter.” And that’s it right there. Erin Gruwell was blessed with a burden. May we each one be so blessed.

So what does this movie and these speeches have to do with anything? I think everything. See, through this story, we see a woman willing to give up her life for the sake of others. And this is the story of Jesus, for Greater love has no one than this: to lay down one’s life… And like her, we’re wired to do something. Because His Spirit is in us, equipping us to do His will. No, we can’t all be teachers, like Erin Gruwell. But the truth is, we each one know something. And our own stories give us the best clues. What is it that we know? What is it in our own pasts that have shaped us and molded us? And can we use it? Will someone else relate to our story?

If you extend your soul to the hungry and satisfy the afflicted soul, then your light shall dawn in the darkness, and your darkness shall be as the noonday. Isaiah 58:10

Those are beautiful words through Isaiah. Moving words. Inspiring words. But you know, they’re not beyond us. Each of us can extend our souls to the hungry and satisfy the afflicted. We just need to figure out what we know, and how to use what we know. There is a practical way to accomplish Isaiah 58:10, like Erin Gruwell who used teaching abilities to lead young kids. She reached out to a group of intimidating kids, and chose not to give up on them. Most of the world turned away from them, but she used what she had to satisfy their afflicted souls.

Yes, it’s pretty tempting to say, “I’m from Virginia and I don’t know anything.” Especially when I open my eyes to the harsher realities of life. And when I contemplate all the causes and issues I can align myself to, it’s completely intimidating. Because which one is the right one? Do I really know what God equipped me to do?

In truth, I do know something. See, like those freedom writers, I can use my own voice to tell my story. And although I’m an ordinary woman, I know how to turn on a small light in a dark room. I do know the difference between right and wrong. And there’s a whole world beyond my borders. Before I know it, I’ll be blessed with a burden for something that is beyond me. Then, I’ll know what I’m supposed to do, for I’ll have a burning passion. And when He leads me to it, whatever it may be, my whole life will make sense. For it’s what I’ve been waiting for… my burden.

God in heaven is looking down on me. Before I know it, He’ll call out and say, “My daughter… you have been blessed with a burden.” Then I will know…

“We are most alive when we are loving and actively giving of ourselves because we were made to do these things.” – Francis Chan, Forgotten God

One thought on “So, what do you know?”