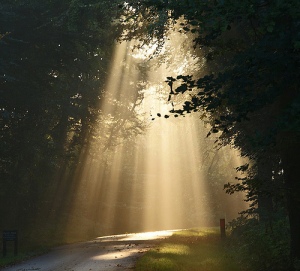 With me, it began with His word. In the beginning was the Word, and the Word was with God, and the Word was God. He was with God in the beginning. All things were created through Him, and apart from Him not one thing was created that has been created. Life was in Him, and that life was the light of men. That light shines in the darkness, yet the darkness did not overcome it. John 1:1-5. How beautiful are His words. And how beautiful is He, for He is the Word. And He is the life. He is the light of men and He shines in the dark, for darkness could not hold Him.

The Word. God’s word. I feast on it. And thus, I feast on Jesus. But I haven’t always. No, for so long I nibbled on bits and pieces of Him. But eventually, bits and pieces grew to a steady diet. And now, I cannot get enough of Him. Because the more I read, the more I know about Him. And His word is transforming. See, through the pages of Scripture God begins to speak to us… directly and individually and specifically. And that’s where it all began with me. Reading the word. Reading Jesus.

It was three years ago that I had had enough. Enough of me. It was a turning point, really. And so, I sought God fervently… through His word. And He spoke volumes to me. For it was through the pages of Scripture that I found out what I needed to do to move from where I was. In order to move away from me, and the darkness, I had to purpose to know Him in my heart. I had to determine it, and then, move towards the light… towards Him. Because if I wanted to know God, it wasn’t just going to magically happen. I had to participate…

I want to know Christ—yes, to know the power of his resurrection and participation in his sufferings, becoming like him in his death, and so, somehow, attaining to the resurrection from the dead. Philippians 3:10

This verse was a life-changer. But three years ago, I had a different version of the Bible. And then, I read it in light of God. Father God. But now, I see. To know Father God, I must first know His Son. That’s the only way to know God, for Jesus is the way and the truth and the life. And that’s what this journey is all about. See, upon finding Philippians 3:10 so long ago, I didn’t really know what I was asking for when I claimed that verse. Honestly, I simply purposed to know God… aside from His Son. But, oh, to know Christ is to know God. For they are One and the Same. And to know Christ… I mean really know Him… we must follow Him. All the way. And when we do, we begin to put off our old self. We begin to transform as we put on a new self who is renewed according to the image of Him who created us. Colossians 3:10. But this can be painful. For in order to be resurrected, we must first die. And just as Jesus suffered, so shall we. And not just in an eternal, end of life kind of way. No, it’s a daily thing.

I think most of us have heard, “WWJD.” What would Jesus do? Some people wear it on a bracelet, or a necklace. And it’s a nice thought… Jesus would help someone in need, or He would be kind to an unlikeable person, or He would heal the sick. You know all those great things Jesus did. But in reality, Jesus came to die. Ultimately, that’s what He did. He died for us. He put His life last, and put us first. That’s what Jesus did then, and that’s what He would do today. He died, and He expects us to do the same. The truth about God & me? I don’t want to die. Not all the way. Not like He did. I’m too selfish. The truth? All this darkness that surrounds me? Well, there’s layers to it. And one layer for certain is my selfishness. The darkness in which I dwell? Well, I’m still in the tomb. But that’s okay, for I know that I know that I know that He’s working on me. I will be resurrected. And here on earth, too, not on the other side of eternity. It’ll happen here where people will witness my resurrected life. Like Lazarus. Whatever suffering I may endure is simply me dying… to me. Following Jesus unto death. It’s what He would do. It’s what He did. For us.

It was Sunday morning as I walked up the steps to my church that a random thought came to me… “A woman shall encompass a man.” It wasn’t much later that my Sunday School teacher took us to Jeremiah 31. Although we read about the New Covenant, my eyes fell to verse 22… For the LORD creates something new in the land – a female will shelter a man. This is the verse that came to me earlier… different version. That day, I thought God was just telling me His eye was upon me. He saw me. But now, I wonder if it was something more…

Most assuredly, I say to you that you will weep and lament, but the world will rejoice; and you will be sorrowful, but your sorrow will be turned into joy.  A woman, when she is in labor, has sorrow because her hour has come; but as soon as she has given birth to the child,she no longer remembers the anguish, for joy that a human being has been born into the world. Therefore you now have sorrow; but I will see you again and your heart will rejoice, and your joy no one will take from you. John 16:20-22

Labor is painful, but a new life bursts forth. Anguish and pain will turn to rejoicing. In the same way, dying to self is painful. But, new life bursts forth. We’ll receive beauty for ashes, and the oil of joy for mourning. WWJD? He would suffer, and He would die. But He would also burst forth – new life. Remember… He told us these things so that we would have peace. He said we would have tribulation, but to be of good cheer… for He had overcome the world. John 16:33.

Do not rejoice over me, my enemy! Though I have fallen, I will stand up; though I sit in darkness, the LORD will be my light. Micah 7:8

2 thoughts on “Light of men”