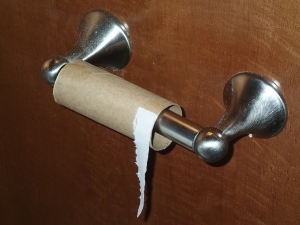 It’s about Levi. Right now, it’s all about him. Let me explain. See that toilet paper roll? This is a pretty common sight in my home. But not because of the men in my life. No, this is something I’ve done on more than one occasion in recent days. It’s because I’m so preoccupied. I think, I’ll get to it later. But I rush from one task to another and forget about it. And so, I set someone up. At least that’s the term used by the usual fall guy. Jason will tell me I set him up. And I just love him. One reason being his great sense of humor. Like the morning I went to the potty and found his precise handwriting in red on the cardboard roll. His message, “Thank you!” My husband made his point very well.

Yes, this is one of my shortcomings lately. I forget to do things. Little things, but important nonetheless. Even yesterday. I thought to myself, put toilet paper in Levi’s bathroom! But I had already walked out the door. I thought, do it when you get home! But time was rushed. And by the end of the night, there was still none in my son’s bathroom. And only a smidge in ours. After feeding my baby at 3:00 a.m. this morning, I hurriedly scrawled a note for my hubby. I left it by the coffee maker “there’s no toilet paper in the bathroom, I didn’t want to set you up.” I guess I could have stumbled downstairs to grab a roll, but the note just seemed easier in my groggy state…

And so, there’s Levi. I guess it shouldn’t have surprised me to find a little something from him a month or so back. A precious thank you note from my boy. An imitation of his father. Right down to the red ink.

I couldn’t help but laugh. But today, I wonder if it’s a laughing matter. See, Levi’s a little bit of Jason and a little bit of me. He learns from us. And my sobering realization last week was that I’m not doing so great. In fact, I don’t think I’ve poured myself into my little boy as I should. Because I’ve been so preoccupied.

In the same hour the fingers of a man’s hand appeared and wrote opposite the lampstand on the plaster of the wall of the king’s palace; and the king saw the part of the hand that wrote. Daniel 5:5

Yep, the handwriting’s on the wall. Or on the cardboard roll. And the message is clear. I’ve been weighed in the balances and found wanting. As usual, my pride lies at the heart of it. And dream chasing. And a faulty foundation laid at childhood, cemented in place over years and years. Problem is, I’ve been using the world’s set of scales, not God’s. And by the world’s standards, I’d say my worth is pretty low. And so my entire life I’ve fought this feeling of unworthiness. Shame of who I was and am… a house painter’s daughter. Shame of things I’d done. All along, I’ve been trying to be more than. I wanted to prove I was worthy.

And so, I chased a dream. Because if it came true, I’d then be able to prove to the world I’m really somebody. The dream realized would validate me. It would mean I have value.

…for they loved human praise more than praise from God. John 12:43

And then there’s Levi. See, his foundation is being laid now. And my actions will cement into place feelings he will carry with him the rest of his life. What I do now, and how I interact with him is crucial. And me telling him I have other things to do sends the message that he’s not as important as my work. Or as my writing. Or whatever else it is I’m doing. Me saying I’m too tired to read a story tells him I don’t care enough… Me putting everything else first tells him he’s second. Less than. And without even knowing I’m doing it, I’m minimizing his worth. Devaluing him by my careless actions. Before I know it, he’s absorbed what I don’t want him to. Evidenced by a cardboard roll. Evidenced by sucking in his tummy as much as he can while staring in the mirror. “I want to be this skinny,” he said. Yes, a little bit of Jason. A little bit of me. Well, quite a bit of me. But the little bit I’ve poured into him seems to be faulty. The foundation shaky. For he’s using the wrong set of scales… the world’s.

Good news is, God opened my eyes. It was Saturday at 4:00 a.m. when Levi began vomiting. It was pretty bad. All he wanted to do was lay on the bathroom floor. I asked if he wanted me to lay beside him. And so, amidst blankets and pillows and a cold tile floor, I lay by my son’s side. I held him. And it was there I found my purpose. My value. For I. Am. A. Mother. No greater responsibility do I hold.

God’s blessed me with children. They’re not a chore, they’re a gift. A privilege.  And if I simply do what I’m supposed to by training up my child, by teaching him to love the Lord God with all his heart and soul, by teaching Him to be like Christ, then I am doing everything I need to. This is my place in the world. This. See, it’s not about me, it’s about Levi. My children. And I have the opportunity to give them the right foundation. Valued because they are God’s. Not because the world says so. 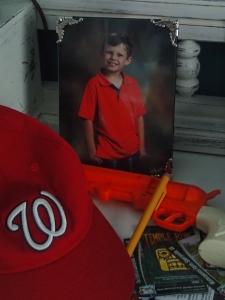 Yep, it’s about Levi. See, I fear I’ve set him up. Because as I said, he’s a little bit of me and a little bit of Jason. And my foundation has been unstable. And inadvertently, I’ve been pouring the wrong foundation into my boy. Funny thing, though. Several times this year I’ve had a thought. There are moments I feel like God set me up for a fall. That sounds terrible, I know, but He knows my heart. He knows where I’m coming from. And that’s the point. Where I’m coming from. My humble beginnings. It’s because of where I began. In my eyes, from a low station. It’s a place I feel I should rise above. And so, pride set up in my heart. And so goes the story… a fall.

Esther 4:14 is stirring to me. See, it’s about purpose. For such a time as this… In passing, I’d think, Yes! God has this grand plan for me. Something big in His kingdom. But now I know. The biggest thing I can do is my kids. My for such a time moment is here. In my home. And yes, on my bathroom floor. Because in truth, charity begins at home. Ministry within my walls. Church here. Building up the little people He gave me.

Yet who knows whether you have come to the kingdom for such a time as this?” Esther 4:14

You know, I feel I started from a low position. Humble origins. But coming full circle, I see this is right where I should be. Humility my garment and a servant’s heart instead of pride. Like Christ. Because here, from my lowly position I can see Him. I can look up to my Father. And there, in my Daddy’s eyes, I realize I am valuable. That He has great purpose for me. I fulfill it when I’m crouched down. On my knees. Bringing myself to Levi’s level. Looking him in the eye. For when I give my son all of me, I find I give him value. Worth. Importance. And in my eyes, he’ll see it.

Yes, today, I have hope for my boy. See, the cement of Levi’s foundation hasn’t been set up yet. It’s still pliable. There’s time to instill truth into him. God’s truth. This is what will set him up for success. And just because the world’s set of faulty scales has been mine, it doesn’t mean they have to be Levi’s. So that’s the job that lies before me today. Setting up my boy’s foundation. There’s my purpose.

Pride comes before destruction, and an arrogant spirit before a fall. Proverbs 16:8