I love this calendar. Bright and inspirational. I gave one to my friend for Christmas but for some reason, I didn’t buy one for myself. But God knows what he’s doing. He inspired my cousin to give me the very same. It was this weekend when I was moved to take pictures of it. See, I had a blog forming in my head. In fact, I typed it all up only to find myself typing over every word tonight. See, it wasn’t a good blog. In fact, it was more of a blah, blah, blaahhg. Me running my mouth via keyboard.

But the thing is, God really does know what He’s doing. Unbeknownst to me, He knew I’d use the photos for this blog. The one I’m writing now. It’s for my friend. See, on the heels of me writing about my struggle (a shallow one), I learned tonight that my friend is truly struggling. It’s her dad. And my heart breaks for her. 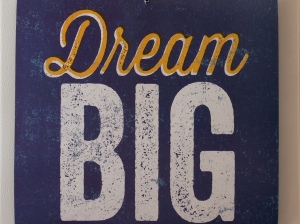 Let me tell you how I met my friend. It was the fall of 2013 and I just had to do something. I didn’t know what, but something. God had gotten me all fired up and I was ready to move. So, I volunteered to help with the backpack program in our county. And let me tell you, this was completely out of the norm for me. I’d never stepped out of my comfort zone like that. And it was there I met my new friend. We were the only two newbies and didn’t really know what we were doing. And so, we did what we could. Afterward, the person in charge thanked everyone and said he’d no longer need any of us. Apparently, the high schoolers were going to take over the stuffing of backpack bags.

Well, I was shocked. I’d just stepped out to do something. For God no less. And I was halted in my tracks. My eyes caught the other newbies as I looked her way and I could tell she was thinking something close to what I was thinking. Stepping out to do something and after one time, it being nipped in the bud. What in the world? And more importantly, what next?

We walked outside dejectedly, our venture out into the community getting quashed and all. But that’s when we began to talk. Before I knew it, at least twenty minutes had passed. There was so much to say. Within moments, we were sharing dreams. Ideas. Mine was beyond my walls. Hers was in our own backyard. It morphed into a leg up, not a handout. That’s where we began, my new friend and I. Our friendship built on hopes and dreams.

You know what I think? She was a gift from God. See, I returned home three years earlier but life carried on while I was away. And in my absence, everyone else’s lives just moved on. And so upon my return, I wasn’t sure where I fit anymore. Most of my old friends were gone and so much had changed. And so, just when I needed one the most, God blessed me with her. A friend of my very own.

Over a matter of months, we met several times exchanging ideas and dreams. We also began volunteering at the food pantry. It was great. Afterward, we’d grab a coffee and dream some more. What I remember most about our early days is that we were both on fire. Alas, I became pregnant within months of our meeting. That kind of slowed me down. But not my friend. She kept right on moving. See, she’s a mover and a shaker.

By the time Annabelle was born, I discovered my friend had started this new thing in the community. While I was tucked away in seclusion, she actually got out there and did something she was passionate about. I must confess, I was a little jealous. But also, inspired. By her. See, I admire so much about her. She is a go-getter. She’s interested in what’s happening around her. And she wants to make a difference.

Look at her. I think she’s beautiful. And in looking at this picture, the Rolling Stones melody falls on my ear… She comes in colors everywhere… she’s like a rainbow. Yes, she’s like a rainbow. A force of nature. But tonight, she struggles. And in hearing the news, I wanted to go to her. I wanted to put my arms around her and squeeze. But she’s miles and miles away. And so, I do the only thing I can for tonight. I write. It’s what I do.

Do not gloat over me, my enemy! Though I have fallen, I will rise. Though I sit in darkness, the LORD will be my light. Micah 7:8

Tonight, my friend’s dad struggles. And so does she. And for once, words fail me. My mind is blank. Unlike yesterday when I pounded away at this keyboard and wrote and wrote. Remember… my blah, blah, blaahhg. Funny thing is, I didn’t know which song I wanted to use. I called out to Jason, “Gut feeling… Ring of Fire by Johnny Cash or I will Rise by Chris Tomlin.” Jason said knowing me, Johnny Cash. And that’s the one I had in this blog originally. Even though I will Rise was a better fit, I manipulated my words to make Johnny’s song work. But now I know it was the wrong choice.

See, God knows what He’s doing. He inspired me to take photos of a calendar yesterday. But it wasn’t for me, it was for her. My friend. He also knew which song I’d need. Because since I have no words I can offer my dear friend, all I can do is offer a song. It kind of echoes what Uncle Reid said. Because believe it or not, in the face of such darkness, it really is going to be ok. And even if it’s not, it’s STILL going to be ok.