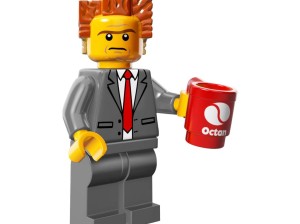 February 8, 2014. That’s the night I saw the Lego movie. I know for certain because that’s the evening I received Annabelle’s middle name. Wynn. Oh, I can recall the details of February 8 very well… the delicious feeling of my secret while at dinner with friends. See, I was pregnant and they didn’t know. And the best part was my girlfriend was expecting her first grandchild at the time. As she sat there delighting over her daughter’s news, I quietly sat delighting in my own. That tidbit made the secret all the more juicy.

And so, after dinner, we watched the Lego movie. Honestly, I was not happy at first. I remember thinking, “I have to sit here for two hours for this?” It just didn’t seem to be my kind of movie. However, God used it to teach me something anyway. I don’t know if I got the lesson then, but I got it a week back when Levi watched the movie here at home. It has to do with Lord Business.

Spoiler alert… if you haven’t seen the movie and plan to, stop reading now. I’m going to divulge some details about a character named President Business a/k/a Lord Business. See, he controlled everything. He was the man in charge. However, the people in Lego land were deceived. They saw him as a business man in a suit but behind closed doors, he showed his true appearance. His pride and controlling nature on full display when he changed into his Lord Business costume. The ensemble came complete with elevated legs/shoes.

Every single day was alike for the citizens off Lego land. They woke up and went through the motions of the day religiously. Nothing ever changed. And they liked it that way. They sang, “Everything is awesome…” Monotonous. Tedious. Boring. One day after another… exactly how President Business wanted it. What the people didn’t know is that he was actually Lord Business and he had an evil plan. He had something called the Kragle (Krazy Glue with some of the letters missing) and he was going to glue everything in sight. He was going to cement all the pieces in a perfect way. According to his pattern. He was delighted for it would be beautiful to behold. And nothing would ever change. Everything would stay the same forever… no movement. 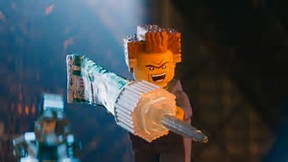 I have glorified You on the earth by completing the work You gave Me to do. John 17:4

So what does this Lego movie have to do with the spiritual life I try to write about? To sum up… everything. Simply, everything. It’s what this blog has been leading me to this whole time. Freedom. But to tell, I have to go to the beginning… to the garden where God created man in His own image. Male and female. He formed man out of the dust of the ground and breathed the breath of life in his nostrils. Man became a living soul. And on the seventh day, God completed HIs work. He rested on the seventh day from all His work that He had done. He blessed the seventh day and declared it holy, for on it He rested from His work of creation (Genesis 2:2-3).

And there’s my lesson right there. For I count the word work three times in that passage. And us, the work of His creation, do the same. We create. We work. And He wants us to work. However, today I question some of the work we do. What is it we actually accomplish in all our busyness? Is the work of our hands inspired by Him, or have we gotten caught in a rut? Do we move and perform by the Spirit’s inspiration? Or is our service perfunctory? Do we find ourselves in the same circumstances the citizens of Lego land found themselves? In danger of being stuck? Cemented to something God doesn’t even want us to be affixed to? Or do our actions bring Him glory as all our works should? And if they don’t, could it be our actions cause us to bow down to Lord Business instead… all our work glorifying the business of church rather than God Himself? Do we marvel at the work of our hands rather than the God of all creation? Delighting in our earthly sacrifices and not in Him? And if that’s where we find ourselves, how can we unstick ourselves?

And God said to them, “Be fruitful, multiply, fill the earth…” Genesis 1:28

God said to fill the earth. He didn’t tell His creation to stay in one locale, for He wanted His people to spread out. But in the eleventh chapter of Genesis, something else occurred. For His creation said, “Come, let us build ourselves a city and a tower with its top in the sky.” And their motivation is clear… “Let us make a name for ourselves; otherwise, we will be scattered over the face of the whole earth.” The people didn’t want to move. Or to change. In fact, they wanted to stay right where they were. Kragled to a specific locale. So they decided to build. And not only that, it had to be tall. Up to the sky. Everyone would know who they were. Pride elevated their goals… their intentions as lofty as the legs President Business put himself into when he became Lord Business.

Flash forward to a new scene. Jesus and the disciples. And Peter had just had the mother of all revelations. He knew the truth… “You are the Messiah, the Son of the living God.” And this is when Jesus said, “I also say to you that you are Peter, and on this rock I will build My church…” The next thing you know is Jesus took the inner three along with Him up a mountain. Peter, James and John were alone with Jesus when something amazing happened. He was transformed before them as His face shone like the sun. Even His clothes became as white as the light. Then suddenly, Moses and Elijah were with Him talking.

Always outspoken, Peter was inspired to voice his lofty aspirations. “Lord, it’s good for us to be here! If You want, I will make three tabernacles here.” Peter beheld Jesus in all His glory and so he wanted to do something. He wanted to create. To build. “Let us make…” But before he could even formulate his thoughts and plans and put them into action, a bright cloud covered them. There was a voice: “This is My beloved Son. I take delight in Him. Listen to Him!” And so the work Peter wanted to do was halted in its tracks. It’s not what God wanted.

The Word became flesh and took up residence among us. We observed His glory, the glory as the One and Only Son from the Father, full of grace and truth. John 1:14

What Peter wanted to do wasn’t bad. And if I had been in shoes, I’d probably have wanted to do the same. I’d want to build and create something tangible to give credence to the event. I’d have wanted to run down that mountain and tell everyone… “Guess what happened!” But Peter couldn’t do that. Because Jesus told his disciples to keep quiet. About the revelation of all revelations… Jesus Christ, Son of God. And also about the glory witnessed by the inner three. What a secret to keep.

Today, I wonder about Peter’s motivation. And me being me, I think I have an idea of what he may have been feeling. Because I know how I would have felt. Perhaps a bit lofty? Special, even? Maybe even as high as Lord Business when he placed himself in those elevated legs. Maybe that’s what prompted Peter to begin with. He wanted to erect a building. He wanted to get busy working. Because God had just revealed something huge. What a revelation. Not only that, Jesus gave him a new name… Peter, which means rock. He was told the church would be built on “this rock.” Built on a revelation. On a person… the person of Jesus Christ. And Peter’s natural inclination was to get busy. To work. To create. And why wouldn’t he? He, like us, is made in God’s image. A creator. A builder. A worker.

She had a sister named Mary, who also sat at the Lord’s feet and was listening to what He said. But Martha was distracted by her many tasks, and she came up and asked, “Lord, don’t You care that my sister has left me to serve alone? So tell her to give me a hand.” The Lord answered her, “Martha, Martha, you are worried and upset about many things, but one thing is necessary. Mary has made the right choice, and it will not be taken away from her.” Luke 11:39-41

Here’s what I’m thinking. Yes it’s true there’s work to be done while we walk God’s earth. Because the fields are white, we must pray the Lord to send laborers. Those who will work and serve God. However, before we can do the work of God, a work must take place in us first. It has to. If the inner doesn’t happen, the outer means nothing. If the inner doesn’t occur, then we may end up like Martha. Bitter and resentful. Serving out of compulsion. Working because we feel like we have to. Bowing down to Lord Business instead of glorifying God above. Laboring as a slave, and not serving out of love. I know because this is what happened to me.

For you are called to freedom, brothers; only don’t use this freedom as an opportunity for the flesh, but serve one another through love. Galatians 5:13

The inner must happen. And that happens only when we sit still at the feet of Jesus. It’s what God told Peter. It’s what He tells me. “This is My Son. I delight in Him. Listen to Him!” But this takes time. It’s secret and quiet… as secret as a baby knit together in her mother’s womb. Naked to the eyes of those around you, a story of you and Jesus unfolds within your own heart. A miracle takes place inside. And it’s delicious. You hear His voice. And as you listen intently, you begin to transform. Over time, your face becomes as bright as the sun. And as your heart melds with God’s, you stop trying to find satisfaction and delight by the work of your hands. Instead, you delight yourself in Him. Only Him. And without even trying, His work becomes your work. Naturally. Without lifting a finger, you begin His work. And it has nothing to do with business, or busyness, at all.

At least that’s the way it happened with this working girl. A slave become a daughter. And perhaps the best way to describe how that feels is the Lego movie theme song. Because it’s true…