Therefore do not worry about tomorrow, for tomorrow will worry about itself. Each day has enough trouble of its own. Matthew 6:34

See that guy? That’s my husband. I followed him home about eighteen years ago and for a while, I split my time between his hometown and mine. But whenever I drove away, I cried. That’s because I hated to leave him and didn’t want us to be separated. But more than that, fear of what next consumed my heart and mind. What if we grew apart while I was away? Suppose circumstances changed and I wasn’t able to come back to him? I was so scared of what the future held, I tried holding him tighter (notice the grip I have on his t-shirt). In fact, because I was so clingy and hugged him so tightly ALL THE TIME, it became a bit of a joke between the family. 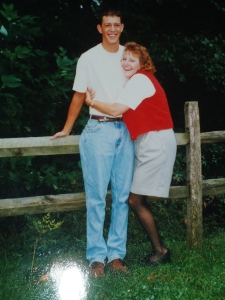 See what I mean? That’s my mother-in-law and they were laughing because she was imitating me. And I laughed, too. Because how could they possibly know the real reason for my clinginess. And in truth, I didn’t even know myself. I simply believed in the power of my arms… that if I clung to Jason tight enough, there was less chance he’d slip away from me. I thought if I kept my hands on him all the time, I wouldn’t lose him. One day, I gave voice to my anxiety. I told Jason my worries. I don’t remember exactly what I said, but I do remember his reply. Because he was angry. He said, “What if, Pam? What if?” He fussed about me being upset over something that hadn’t even happened. I was worked up over what might be. Anxious. And fretful. I was dark and moody over a what if that never came to pass.

And so, our story began. First came love. The picture below was taken seventeen years ago just before he proposed to me. 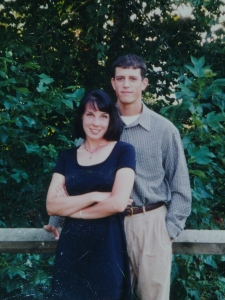 And here we are eighteen years later… needing another baby carriage!

And so today, I understand I expended a lot of useless energy fretting over things that never happened. Today, I’m right where I’m supposed to be with the family I’m supposed to have. My cup runneth over. And yet, I find myself doing the same thing all over again. I’ve been anxious. I’ve been worrying. And I have a whole new set of what if’s that set up shop in my brain. Jason recently remarked on what a scary place my mind must actually be. That in reply to something irrational I either said or did. It could have been any of the following…

I lock the basement door at night because it’s beside our bedroom door. Reason being I fear my son will stumble through the house at night and open the basement door instead of walking through our door, which would obviously cause him to tumble to the concrete floor below. And for three months now, I’ve been driving my car to the end of the driveway when it’s time for the bus. And there I sit there with my baby in my arms, tensing up with each passing car. As they whir by, I wonder if this is the one that will lose control and plow right into us. If my son runs down the paved driveway, I cry out, “Slow down or you’ll fall!” If he touches my little girl’s mouth, I cringe and cry out, “Did you wash your hands?” Germs, you know. Of course, I wash my hands about twenty times a day. And let me not go into the details of the time I was convinced – CONVINCED – that my son and I had worms! We didn’t, by the way. And I could go on and on. The list is endless.

Don’t worry about anything, but in everything, through prayer and petition with thanksgiving, let your requests be made known to God. Philippians 4:6

So here’s the thing. I just went through this two years ago with my son. I confronted my fears and thought I’d overcome them. And I lay them down anew this past summer. But here I am again facing the same demons. I have to ask myself what’s happened? What’s changed? And it’s so obvious. I had a baby. And she’s fragile. She’s new. And you know… I’m just not a natural mother. I’m not like those women who are so good and easy with their kids. Some women are just gifted that way. Motherhood seems almost effortless on their part… they flow. Me? I’m uptight. Nervous. In fact, the only thing I seem to be a natural at is worrying.

When I first brought Annabelle home, she went through something called cluster-feeding. She ate and ate. She was on my chest for hours at a time. I’m not exaggerating. HOURS. One night I became frantic after one of her cluster feeds because she kept pulling back and arching her back. She just wouldn’t stop crying. Then I remembered skin on skin. I stripped us both down and pulled her tightly to me. I encouraged her to eat, but to no avail. Finally, I woke my husband in a panic. “I think she forgot how to suck!” He calmly took her in his arms and stretched her across the bed, and she quieted. Turns out she didn’t forget how to suck after all. She was just through eating.

Not long after bringing Annabelle home, we realized she spits up after every feeding. This just adds to my fears. She could choke. So I try to keep her upright as long as I can. The worst spitting episode came was when my son gave her a bottle. Because he held it in her mouth, the spit up went up her nose and she did choke. Once she was able to, she cried so. And me, too. An hour later, I cried again when I told my husband. Ever the voice of reason, Jason said she seems okay now. Later, though, after hearing some weird noises coming out of Annabelle, I remembered a dry-drowning article I read. So I sat there and peered at her for hours. Again, I woke my husband in the middle of the night. “She’s having trouble breathing and has little bubbles coming out of her mouth!” I actually thought she was going to dry-drown on her own spit up. Alas, we made it through the night and she was okay. My husband was right after all.

Give all your worries and cares to God, for he cares about you. 1 Peter 5:7

Reality? After eighteen years, I still cling. I still fret. I’m still anxious. I worry about things that are out of my control. I’m secure in my marriage, so now I fear losing something else. A million new what if’s have taken over my heart and mind. And it’s absolutely exhausting. I’ve been relying on my feeble arms and my human strength in an attempt to control everything. EVERYTHING. And I imagine the worst. And today, it’s as if I can hear the echo of what my husband said eighteen years ago… “What if, Pam? What if?”

So today I must contemplate what feeds the what if’s of my imagination. What compels me to lock basement doors and hold my breath as I sit at the end of the driveway. And it’s not necessarily an accident or sickness I dread, it’s what could be the end result of those things. Fear of losing the one I love. That’s what it was eighteen years ago, and it’s the same thing today. And so, I worry about it. I think up all kinds of crazy scenarios that might happen, and try to stop them before they do. And I think if I hold on to what’s most important to me, I can control what happens to them. But I can’t do that. No one can.

In light of my lack of control, I have to consider another “What if?” See, a while back I read the question, “If God were real, and He is who He says He is, what then?” It was meant to be a challenge because a lot of us say we believe in God, but do we really? I mean deep down in our soul believe. Because if God is real, and if His word really is truth, what then? The right answer… I would not fear. I would not worry about tomorrow because I know that He is in control. But for the life of me, something won’t let me let go of fear.

There is no fear in love, but perfect love casts out fear. 1 John 4:18

I love the picture below. It captures all I hold dearest. That’s my family. This is my town. And look at that little angel. For three months now, I’ve been clinging to her. I hold her so tightly in my arms and cover her with kisses. And that’s not a bad thing. But the danger in holding her too tightly is losing my grip on God. And thus, faith is diminished. I’ve not been leaning on those everlasting arms, rather, I’ve been trusting in the human arms that hold my daughter. I’ve been looking to me to keep my family safe, not God. And I know I can’t do that. Deep in my heart I know I can’t control anything. So why do I keep trying?

Eighteen years ago, Jason said “What if, Pam?” He was the voice of reason. And he was right because the things I feared never came to pass. And in looking at the picture above, I see the worst did not happen. I didn’t lose Jason after all. Instead, God gave me even more than I could have hoped for. The scared young woman I was had no clue what God had in store for me. For us. And so today, I pray I can remember the truth about what if. That most of the time, what if doesn’t even come to pass. That the terrible things I scare myself with are all in my head. And no matter how hard I try, or no matter how hard I cling to someone or something, some circumstances are simply out of my control.

You know, what if could happen. It could. And if it does, I just need to remember the other “what if.” Because what if God is real and He is who He says He is? Well, then… He’ll see me through it. Whatever “if” turns out to be.

For I know the plans I have for you,” declares the Lord, “plans to prosper you and not to harm you, plans to give you hope and a future. Jeremiah 29:11

One thought on “What if?”