About four months ago, I stayed with my in-laws over the Thanksgiving holiday. And for the first time, we used my husband’s grandmother’s room. Her name is Alice. We used her bedroom because Alice needed more medical care than normal, and had been staying at a rehabilitation facility since October. And so, while sleeping in Alice’s bed and using Alice’s bathroom, I was struck by what surrounded me. It was all of her stuff. Loads of it. Bottles and tubes and compacts and sprays. And in November, my realization was that no matter what age a woman is, she wants to feel pretty. Whether she’s 9 or 90, a woman cares about how she looks. 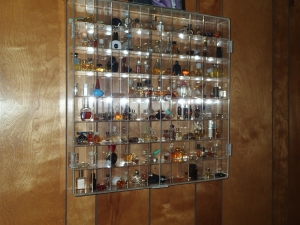 I snapped lots of photos thinking I would use them one day in a blog. And so, I find today is that day for Alice passed on last night. And despite my having a list of a thousand things to do, I pause for just a moment to remember this woman. See, she was 89 years old and I’ve known her close to 18 of those years. At the very least, she deserves a moment of my time. And so, I consider Alice. Honestly, one of the first things that comes to mind is painted nails. Her fingernails were always presentable. And always colored. And not a demure, faded pink, either. No, Alice went for bold colors. When I saw her this past Monday, she had purple nails adorned with flowers. The nails gave testimony to her personality, for in earlier days, she was a force.

And when I say earlier days, I mean up to about a month ago. Oh, she may have been in a nursing facility, but that doesn’t mean that she was a sinking ship. No, not Alice. She clung to life. And it was just a month ago that she was made Queen at the Valentine’s banquet where she was staying. I saw her picture displayed in the foyer when we went to collect her things… bright dress, crown and flowers. She looked completely different than the woman I saw on Monday. And what tales I heard. She danced at that banquet. A lot. And I heard that she was an inspiration to everyone at that facility, for she breathed fresh life into the place. The nurse who came to visit Alice yesterday shared the tales of Alice. And before leaving, she deposited no less than 20 kisses on Alice’s cheek. So many had sent by her, “Kiss Alice for me…”

Yes, Alice loved colorful nails. She loved life, and dancing, and laughing. And really, she just loved being the center of attention. For she had no fear of crowds and enjoyed interacting with people. Anyone would do. She just wanted to be a part of what was happening. Like many moons ago when she came to visit us. We were at church one Sunday, and when the question was posed, “Do we have any visitors today,” Alice stood right up to boldly proclaim her name. As I said, no fear. Not an ounce of shyness resided in those bones.

Alice, who had bold nails and a zest for life, also had another love. Baubles and gems. Necklaces and rings of every color, shape and size. If Alice had an errand, she went out in style, her clothes coordinating with her jewelry. Always. Well, at least till the end. For this woman named Alice was nearing 90, her birthday just two months away. And ever since her big night when she was not just the queen, but the life of the party, pieces of Alice have been stripped away. And yesterday morning, well, she just didn’t look like herself. For her hair was undone and her nails bare. Legs that once moved with rhythm laid still. Rather than a watch, her arm was adorned with a hospital bracelet. And rather than chains of gold, tubes fell along her chest. A body that once displayed brilliant pinks, was draped instead with a drab hospital gown. Yes, 89 years had taken their toll, and her body finally gave way as the glow of life within her faded. What remained of Alice was a shell. Her sparkle was gone.

You know, in recent days, I’ve heard the church being referred to as the bride of Christ. It stuck out because honestly, that’s a hard concept for me to comprehend. But today, in light of Alice’s passing, I find it beautiful to behold. Because Alice, being part of the church, is also His bride. And I wonder if that’s why she held so tight to this life at the end. I wonder if she just didn’t feel ready. Because she was stripped of all that she so loved in this world. Where were her scents and polishes and baubles? The glitzy necklaces and sparkly rings were no where to be found. And truly, what bride wants to meet her Groom undone? What bride wants to walk down the aisle minus all the things that make her feel lovely? What woman doesn’t want to feel pretty on her special day?

And so, at this I smile. Because today I know that what Alice adored so in this life is now a part of her ever after. And I see that she didn’t need a strand of pearls or a shade on her lips, for indeed, she is adorned by heaven itself today. And graced with the colors of eternity, what woman could be more beautiful? No, she had no need of pearls, for the gates of heaven become her pearls. And what need of golden chains had she, for the very street she travels is gold. No, Alice didn’t need bold polish on her nails as she exited this life, for at this moment, she is surrounded by such brilliant color. Alice, who loved bright nails and dancing and laughter and colorful gems, is now encompassed by the very things that brought her such joy in life. For she’s a bride. And she’s dancing and laughing in glorious color. Yes, Alice colored herself here. But there, color is so much more than she could ever have imagined.

The foundations of the wall of the city were adorned with all kinds of precious stones: the first foundation was jasper, the second sapphire, the third chalcedony, the fourth emerald,  the fifth sardonyx, the sixth sardius, the seventh chrysolite, the eighth beryl, the ninth topaz, the tenth chrysoprase, the eleventh jacinth, and the twelfth amethyst. The twelve gates were twelve pearls: each individual gate was of one pearl. And the street of the city was pure gold, like transparent glass. Revelation 21:19-21

Yes, Alice has passed on to the other side. I feel sure of it. For it was Tuesday late afternoon when she roused a bit. She twitched and jerked for a moment, then looked to the right. Her eyes opened wide and she smiled. And twice she said it… “Peter.” We all wondered who Peter was. And then we smiled. We thought, it’s true! Peter is at the pearly gates. Perhaps it was he that walked her down the aisle.

6 thoughts on “A bride’s tale”