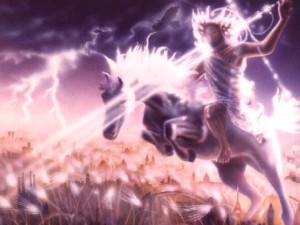 I’d never given much thought to John the Baptist before this week. I knew who he was and what he did and what Jesus said about him… “I tell you, among those born of women no one is greater than John…” Luke 7:28. But really, I just never settled on him. But today, I think for the first time, I caught a real glimpse of who John was. And what opened my eyes was the realization of why he never fully captured my attention before now. Basically, he didn’t stand out because he wasn’t supposed to. That’s because he did exactly what he was called to do as He fulfilled his mission on earth. He decreased so that Jesus could increase (John 3:30). You will find that he never pointed to himself, rather, he always pointed to Jesus. He didn’t proclaim who he was. Instead, he heralded the One to come.

And child, you will be called a prophet of the Most High, for you will go before the Lord to prepare His ways, to give His people knowledge of salvation through the forgiveness of sins. Because of our God’s merciful compassion, the Dawn from on high will visit us to shine on those who live in darkness and the shadow of death, to guide our feet into the way of peace. Luke 1:76-79

Yes, John was a prophet of the Most High and his job was to prepare the people for the One to come. But until his time came, he remained in the wilderness. And it was there that a miracle occurred, for God’s word came to John the son of Zechariah. And as he went out, he caused a bit of a stir. John developed quite a following in that he had his own disciples. And because he was such a force, the Jewish authorities sent out messengers to question him. See, their traditions were messed with as change arrived on the scene. And they didn’t like it. So, the Pharisees sent out priests and Levites to question John, “Who are you?” But John didn’t give out his name. Despite his being chosen by God and the voice, he simply replied, “I am a voice of one crying out in the wilderness: Make straight the way of the Lord…” See, John was humble. He didn’t exalt himself because he knew One was coming from above. And he knew the One coming from heaven was above all.

Today John the Baptist captured my attention. Fully. Because today I realize I need to be just like him. In the past year, so much has occurred. I climbed high with God, only to fall down into the pit of darkness. But, part of the climb was self-seeking. And much of the reason for the fall was pride. I’m the one who dug the hole. And it’s there, in the dark hole of my wilderness that transformation took place. I was humbled and turned to God. And there, in my wilderness, a miracle occurred. For God’s word came to me. And now, I believe he’s sending me out. However, it’s not Pam He’s sending out. Rather, He’s sending “a voice of one” to cry out from the wilderness. My mission being no different than John’s. For in looking back, I see One thing remains the same. Just as John pointed to the One to come after him, I can do the same today. For the One who comes from above is coming back. The Dawn who walked the earth in John’s day will return. He is the One I can point to. As John decreased, I must do the same. So that He may increase.

And so today, I know. If someone asks for my name, or demands to know who I am, I can answer as John did. I can say, I am a voice of one crying out in the wilderness…

“Prepare the way for the Lord; make His paths straight!”

For He will return.

They said, “Men of Galilee, why do you stand looking up into heaven? This Jesus, who has been taken from you into heaven, will come in the same way that you have seen Him going into heaven.” Acts 1:11