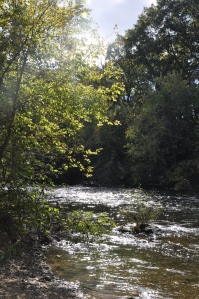 It begins when you determine it in your heart. When you purpose to know God, then things begin to change. What once seemed a chore (reading the Bible), becomes your favorite thing. You come to a point in which you cannot get enough of God’s word. You pore over it, and it is poured into you. You fill up with His words, and then a miracle takes place… words spoken so long ago begin to speak directly to you. God begins to lead you in what’s next. I believe it was the fall of 2011 that Isaiah 51:1 prompted me into action. How beautiful the verse that directed me to go back, back the way I came. This is the verse that made me think of my ancestors, and my upbringing, and the events that led me to where I was two years ago. Yes, I looked back – to the rock from which I was hewn.

And not that long ago, I was again led to my past. Again, I am looking to the rock from which I was hewn. But now, I think God means something more… I see that in reading the Old Testament. You know, God did amazing things with the children of Israel. Miracles took place, and a couple of times – those miracles involved crossing water. God led His people through waters, raging waters, deep waters. But, He stopped the water so they could pass. He did the impossible right before their eyes. The first time, God’s chosen people were enslaved. He delivered them from Egypt… saved them from their circumstances, and they crossed over the Red Sea. Afterward came the wilderness wandering. It was there, in the desert that God spoke to them. Moses approached the thunder and lightning, and entered the thick darkness where God was. And God gave Moses all of His commandments. He told Moses everything that was expected of His people. His commands were set in stone…

I’m sure most of you are familiar with what took place within those 40 days that Moses was away. The children of Israel became impatient, and turned away from God so very quickly. While Moses was receiving all of God’s commands, set in stone, God’s chosen people were turning away from Him. As Moses came down the mountain and saw what the people were doing, so enraged was he that he broke the stone tablets… the tablets that contained God’s holy word, inscribed by God’s own finger. The stone tablets were shattered, a picture of how God’s chosen people were shattering His laws by their actions. You know, in the next chapter of Deuteronomy, Moses was given that law again.

“The LORD said to me at that time, ‘Cut two stone tablets like the first ones and come to Me on this mountain…” Deuteronomy 10:1

Moses spent yet another 40 days and 40 nights with God, like the first time, and he received God’s words anew. Again, God wrote His commands on two tablets – His word set in stone. And again, Moses exhorted the people. He again brought God’s word to the people. In my mind, it’s as if the children of Israel were looking to the rock from which they were hewn. They again had to look to the stone… the stone that commanded them how to live their lives before God. They had God’s word to guide them. And they had the presence of the LORD Himself, as He moved them along the wilderness… 40 years.

Then the time came! The promised land was in sight, and God was ready to bring His people into the land. But, there was another river to cross. Another miracle to take place. And God was faithful. He stopped the flow of the Jordan River. An entire nation of people crossed over. Afterward, God spoke to Joshua…

“Choose twelve men from the people, one man from each tribe, and command them, ‘Take 12 stones from this place in the middle of the Jordan where the priests’ feet are standing, carry them with you, and set them down at the place where you spend the night.'” In the future, when your children ask you, ‘What do these stones mean to you?’ you should tell them, ‘The waters of the Jordan were cut off in front of the ark of the LORD’s covenant. When it crossed the Jordan, the Jordan’s waters were cut off.’ Therefore these stones will always be a memorial for the Israelites.” Joshua 4:1-3, 6-7

God’s miracles, set in stone. Stones to mark the Israelites’ path, to remind them of God’s goodness, His faithfulness, His mercy and His power. Stones for future generations to see, and to learn of their forefathers’ God. A God to lead them, just as He led their ancestors. Notice God said to go to the middle of the Jordan. Perhaps it was there, in the middle, that the waters would have run the deepest. Perhaps it was the middle of the dry river bed that the people began to tremble in fear and doubt when they saw the wall of water that could come crashing down at any moment. It was there, in the middle, that they needed to muster the most courage… and faith. It was in the middle of a dry river bed that the Israelites witnessed God doing the impossible… for them. And they set up stone markers to remember His deeds.

And so, this is what I do today. In looking back to the rock from which I am hewn, I am gathering stones. I am setting up stones to mark the path I have already traveled. I can look back and remember, yes, God. When the storm raged its fiercest, when the darkness seemed the thickest, and when the waters threatened to overtake me… God. Markers, in journal format, to memorialize God’s miracles… set in stone. But wait, there’s more. May I not forget the most important stone. Yes, it’s true I come from a family here on earth. Yes, I can look back to the rock from which I was hewn in the form of my ancestors, but there’s the Rock. May I not forget Him:

For it stands in Scripture: Look! I lay a stone in Zion, a chosen and valuable cornerstone, and the one who believes in Him will never be put to shame! 1 Peter 2:6

This rock. This chosen and valuable stone is the stone. If I look to any rock from which I am hewn, may it be this One. For it is Him who gives me victory. Today, I can look back. I can look to God’s commands, which are set in stone. I can look to my past, and the stone markers along life’s highway that help me remember the great things He has done. And I can look to the Cornerstone – for I am cut from His quarry. I can have confidence, for whenever there’s a new river to cross, or a storm to pass, or darkness to overcome, or there are doubts that assail me, I will look to this Rock from which I am hewn. I will remember Him, and how He overcame. Jesus on the cross is the victory. And it’s through His cross that we can cross over at all…

And as for life… well, there will be many rivers to cross. But thanks be to God that we have the cross.