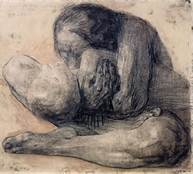 I think we’ve all heard it at least once in our lives. I believe we have all been cautioned by some well-meaning person with the phrase, “Don’t get your hopes up.” And perhaps in accompaniment to the words of wisdom, their heads shook back and forth, or maybe their faces displayed the most severe expression to fully demonstrate the foolhardiness of one who hopes. Because any sound person can tell you… hope surely will be dashed to the ground. And the well-meaning person… likely a loved one… was really only trying to help you when they told you what they did. But truth be known, after hearing it so many times, a person who was once full of faith may fall into the same mindset. Despite the faithful’s best intentions, she may sink down into that grim sort of outlook on life, expecting the worst out of circumstances… and of people. But then, when least expected, hope glimmers and faith renews. And those are the times, for me at least, when the words, “Get behind me, Gehazi,” come to mind. Believe it or not, this will make sense by the end of this blog. After reading this, may we all cry out, “Get behind me, Gehazi!”

It was three years ago that I had great hope. I knew that I knew that I knew that I knew that God was going to return me to my hometown in Virginia. I felt it in my bones. I had come across Scripture, and I felt assured that it was a promise to me, despite being written to the children of Israel so long ago. And so, I was fully expectant, full of faith, and full of hope that my God would bring it to pass. No one could tell me otherwise. And believe me, some tried to. You know those cautious phrases, “Don’t get your hopes up,” and “I’m just saying,” and, “I don’t want to see you get hurt.”

And so, in reflecting on those nay-sayers of days gone by, I cannot help but think about the Shumannite woman in contrast. It’s in the fourth chapter of Second Kings that we read about her, and we find that she was wealthy with no needs. She even took care of others’ needs, including Elisha the prophet. Whenever he passed by, she would urge him to eat. And so eventually, after some visits, she asked her husband if they could prepare a room for this man of God to rest in. And so it came to pass that the man of God wanted to do something for this kind woman who had no needs. When asked, she said, “I dwell among my own people…” Translation, “I’m fine, I don’t need a thing.” Elisha turned to his assistant, Gehazi. It was Gehazi who named something she didn’t have. He knew that the wealthy woman had no son, and not only that, her husband was old. Translation, chances of a child were slim to none. But see, with God all things are possible. Elisha informed the Shumannite woman that she would indeed have a child. He said, “About this time next year you shall embrace a son.” And she said, “No, my Lord. Man of God, do not lie to your maidservant!” Translation, “No way!”

Elisha told the woman who had no need that she would indeed have a son and it must have seemed impossible. Could a baby have been a long forgotten desire that had been buried deep away? Or could it be that this woman had yearned for a baby for years, the longing never extinguished… the burning ever fresh? We don’t really know, only that she in fact conceived and gave birth to a son. And as any mother today knows, this woman had to have loved him with all her heart and soul. And so, what happened next came as such a surprise to me. The child grew, but one day his head began to hurt. So, he was carried back home to his mother. And you know, that Shumannite woman held him on her knees until noon, and then, he died. He died… right there on her lap. Here is a woman who didn’t ask for a child, and yet, the man of God promised her a son. And she bore that son and loved him. But then… death? How could that be?

The woman laid her son’s body on the bed she had prepared for the man of God, and she called for a donkey and her servant. She said, “Drive, and go forward; do not slacken the pace for me unless I tell you.” Translation, “Go as fast as you can and do not stop!” And so she departed, and went to the man of God. When Elisha saw her from a distance, he sent his servant Gehazi. He told Gehazi to check on her well being. But that Shumannite woman had none of that. She answered Gehazi’s questions, but left him behind as she reached for the man of God. See, it was Elisha who made the promise. It was he who was the man of God, and it was he that she was desperate to reach. And as she grabbed hold of him, Gehazi tried to push her away. But Elisha saw her anguish, he saw her pain…

Here we see a picture of a woman… a woman who dared to hope for a son despite the odds. But then, he died… and yet, the woman seemed to have held on to hope. Because afterward, she didn’t stop moving until she reached the man of God. And when Gehazi tried to deter her, she didn’t let him slow her down. When she reached Elisha, she said, “Did I ask a son of my lord? Did I not say, ‘Do not deceive me’?” Translation,”I never asked for a son, and yet you told me I would have one. And so why, now, does my child lay dead on your bed?” Elisha then said to his servant, Gehazi, “Get yourself ready, and take my staff in your hand, and be on your way.” But that wasn’t good enough for this woman. See, her faith lay with the man of God, and so she clung to him and said she would not leave him. And so, He arose and followed her. And Elisha indeed performed a miracle that day. He did what Gehazi could not accomplish, and he roused the child.

I admire this woman because she never gave up hope. And it was at a ladies’ conference last fall that I first heard of the Shumannite woman and her persistence. It was Beth Moore who paralleled this woman’s trek to Elisha as our own trek to Jesus, and she said that there are just those times when no one else will do but Him. Beth said that when those “Gehazis” try to get in our way and block our path, we just need to push them aside and say, “Get behind me, Gehazi!” And essentially, that’s what the Shumannite woman did. And in addition to her unswerving hope and persistence, I also admire that she fully expected the miracle… She dared to hope against all odds. And more than once. When things looked the darkest, she didn’t lose her faith. Because she believed the man of God when he told her that she would have a son. This woman never gave up on her child… not once. And isn’t this what mother’s do today? Don’t we all hold to hope when it concerns our children?

You know, it would be way too easy to shut down. It would be pretty comfortable to keep one’s hopes low, so that hopes would not be dashed to the ground. It would be so easy to just close oneself up tight and to not hope for anything else, ever again… because that would be safe. Because when the Gehazi’s of the world tell us over and over, “Don’t get your hopes up,” we eventually start to think that way. And who wants to risk heartache, right? But that’s not biblical… at all. Because God is the God of hope! And without faith, it is impossible to please Him! And although with man it’s impossible, with God all things are possible! And let us hold fast the confession of our hope without wavering, because He who promised is faithful! Believe Him. Just take Him at His word.

In all my life, there have only been a handful of times that I have felt assured of a promise by God. The first was that He would return me to my hometown. And upon return to my homeland, I felt sure that all of my people would one day be His people (those that are not already His). I felt confident of that when I read a particular verse in Isaiah, and I still believe that today. I claim that promise. And it was the fall of 2011 that I knew that I knew that I knew that I knew that I would have another baby. And sure enough, it was December 13, 2011 that I learned of my pregnancy. You can imagine my surprise when the sonogram showed that there was no heartbeat, and I had a miscarriage shortly thereafter. I didn’t understand… because God promised me a baby. And I did all the right things… I believed it, I hoped it, and yet, no baby. But the truth is, there is a baby. Just not here on this side of eternity… just not here where I can hold him or her on my lap.

It was a few days ago that I came across a note in my Bible placed beside Psalm 30:5. It says, “1/23/12, sonogram 1/20, no heart beat.”  When I read this portion of Scripture over a year ago, I felt assured of a promise: “For His anger is but for a moment, His favor is for life; weeping may endure for a night, but joy comes in the morning.” Yes, I’ll claim the promise I find here. For I’m promised God’s favor for life… And I’m told that joy comes in the morning. And so, that’s mine. I’ll believe it and I’ll hope for it.

You know, God promised me a baby. And he fulfilled that promise, for I’ll meet that baby one day in heaven. And so, for today, I have the hope of a mother and child reunion. And as of today, I will always choose hope. I shall always believe… for “blessed is she who believed, for there will be a fulfillment of those things which were told her from the Lord.” Luke 1:45

And to all those nay-sayers out there… to all those who wisely tell me to not get my hopes up, I forever shall say, “Get behind me, Gehazi.” For I’ll let nothing stand in the way of me and my Jesus.