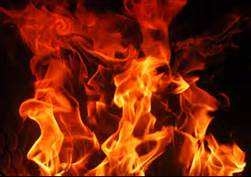 But if I say, “I will not mention his word
or speak anymore in his name,”
his word is in my heart like a fire,
a fire shut up in my bones.
I am weary of holding it in;
indeed, I cannot. Jeremiah 20:9

About a month ago, I was on fire… for God. I wanted to speak on His behalf. I wanted to be His witness. I wanted to glorify God through my words… and so, I typed out messages via blog format. This was my method of testimony. And I thought I was doing what I was supposed to. I was on a specific track headed in a certain direction. I was leaving darkness behind as I was entering His light. And then, I reached the destination of God’s Ten Commandments. His law set in stone. God’s words etched onto a tablet of rock by His very, own finger. And those tablets of stone were then placed inside the Tabernacle. God’s words were kept in the Holy of Holies, placed inside the ark of the covenant, which is also referred to as the ark of the testimony. There’s that word again… testimony.

I thought I knew where I was headed next. See, words swirled through my brain ready for blog format. I was ready to testify. I thought I was God’s girl… His witness. I wanted to magnify the difference between then and now. I wanted to proclaim that long ago, God’s words were etched in tablets of stone housed in God’s dwelling place – the tabernacle. But today, God’s words are housed in His new dwelling place… His chosen people. And His words are etched onto tablets of flesh… the heart. I wanted to show that God’s living word is lifted off the pages of Scripture, and nestled deep into our hearts. The words of the living God… living inside us… living inside of me. I thought I was ready. I believed I was a credible witness. My heart was right, and my motives were pure… or so I thought.

“The heart is deceitful above all things,
And desperately wicked;
Who can know it? ” Jeremiah 17:9

It was just over a month ago that I was halted in my tracks. God’s words leapt off the pages and I cringed when I realized they were meant for me. “What right do you have to recite My statutes and to take My covenant to your lips? You hate instruction and turn your back on My words.” Psalm 50:16-17. I couldn’t believe my eyes. How could this be? I was testifying for God. I was telling the truth. I was typing out messages about His words. What had I done wrong? But then, after I let His words simmer, they penetrated my heart. See, Hebrews 4:12 is true: “For the word of God is living and effective and sharper than any two-edged sword, penetrating as far as to divide soul, spirit, joints, and marrow; it is a judge of the ideas and thoughts of the heart.” The heart. The very place I was ready to testify of… the innermost part of my being where God’s word is housed is what tripped me up. My heart. Deceitful above all things and wicked. My heart… chambers that I thought were pure were instead tainted… filled not with God’s word but something else entirely.

You know… there’s a small church down the road from me. I’ve passed it about a gazillion times. And on the sign out front, you can read, “A half-truth is a whole lie.” That sign has carried the same message for at least three months now. The first time I saw it, I thought it was pretty good. See, there are people out there who need to know that. Other people… not me. But now, after reading it one gazillion and one times, I know it must be just for me. And until I understand this truth, perhaps it will linger there – mocking me each time I pass. I have to get this right.

You see, it was sometime back that the word “liar” kept staring back at me from the pages of Scripture. I tried to address it. But mostly, I just skimmed over it. Because I don’t lie. I don’t tell lies! But you know what… God’s word tells me otherwise. If we say, “We have no sin,” we are deceiving ourselves, and the truth is not in us. If we say, “We have not sinned,” we make Him a liar, and His word is not in us.” 1 John 1:8, 10. Liar. I am a liar in that I don’t recognize my sin. And not only that, by not seeing me as I really am, I make Him a liar, too. And this cannot be.

Sounds desperate, doesn’t it. But there is good news… the fact is, I am God’s girl. And the truth is, I am on fire. And what’s occurring in my life is only natural. Because the closer I get to God’s fire, the more of me will be burned away. For through this journey called life, I find that my faith is being tried (1 Peter 1:7). It was Peter who wisely said to Jesus’ followers, “Beloved, think it not strange concerning the fiery trial which is to try you…” 1 Peter 4:12. The dross is being burned away. And for today, while the ashes still smolder inside, I cannot help but think of “Liar, Liar, pants on fire.” But tomorrow… tomorrow will be another story. For I am being purified by the Refiner’s fire. And what’s left will be golden and true. When the bitter envy and resentment and hate go up in smoke, only God’s word will remain. And then, when only His words fill my heart, I can testify. I can be His witness. And my testimony will be credible. I shall recite His statutes, for…

…his word is in my heart like a fire,
a fire shut up in my bones.
I am weary of holding it in;
indeed, I cannot. Jeremiah 20:9

Here lately, words of comfort escape me. Because I look around, and honestly, all that I see is struggle. It seems as if every person in my life is going through something, and this morning my heart breaks. Every person I know is suffering in some way… whether it’s doubt, bitterness, despair, overwhelmed, distrust, pain, disease, or something else… it’s there. All the people I love seem to be coming to the end of their rope. Do you know what that term really means? It’s when someone is at the limit of their patience or endurance. And this sums it up… my loved ones have just about hit the wall. Patience and endurance are running low, and for some reason, I am empty with regard to words of encouragement. As a matter of fact, it’s as if I, too, have come to the end of my rope. And so this morning, I did the only thing I knew to do. I cried. I lifted my voice to God and asked for His help. For me… and for all those that I know who are at the end of their rope. And I heard Him. He said, “Strength.”

It was the end of last week when I read the book of Ruth. She married a man named Boaz, and his name means, “In Him is Strength.” I entered the word “Strength” in my journal, and wondered if this was the word I needed to carry with me for my present season in life. And so now I know… it is. But not just for me… strength for them… and strength for you. Last week I read a blog that pointed to Psalm 27. This particular Psalm holds a special place in my heart because of the fall of 2010. My husband had a job interview with a company located in Northern Virginia and I wanted it bad. So we prayed beforehand, and we happened to use this Psalm. But before we even finished, I knew the answer was, “Not this one.” I knew it deep down because we prayed… “Wait on the LORD; be of good courage, and He shall strengthen your heart; wait, I say, on the LORD!”

Wait on the LORD and He shall strengthen your heart. Do you know that “wait” means to look for, hope and expect? I didn’t know that till a few years ago. To me, wait simply meant that… wait. But God says not to just wait. He says to look for Him, hope in Him, and expect in Him. He says He’ll strengthen our hearts. And we know (at least in our heads), that there is purpose in the wait. God doesn’t allow us to go through things for no reason. He’s working on us. As we wait on Him, we look to Him. We pray to Him. We ask Him for help… we ask Him for His strength. Because we cannot do it alone. We do not possess the strength to get through life on our own. Remember, it’s “I can do all things through Christ who strengthens me” (Philippians 4:13). It’s “In Him is Strength”, not in me. And so we wait.

It’s recently that I’ve felt a glimmer of excitement. There’s a fresh hope in me. Because God has reminded me of His strength and power. Somehow, I forgot this most important truth. I became weary with my life and present circumstances. But it was yesterday through Psalm 21:1 that He reminded me… there is joy in His strength. It was through Nehemiah 8:10 that He reminded me, the joy of the LORD is my strength. He knew I needed to read this. Because I was coming to the end of my rope. And it’s obvious that all those around me are sliding down to the end of theirs, too. They’ve just about lost their grip in that no endurance remains, and their patience has run thin. They’ve become weary with their trials… they’re tired of their doubt and bitterness, sick of their distrust and despair, they no longer want to feel overwhelmed, and they don’t want to face another day of pain or disease. What LORD, can You offer as a word of encouragement? Because I’ve been feeling down, too. I don’t know that I have the words…

“Have you not known? Have you not heard? The everlasting God, the LORD, the Creator of the ends of the earth, neither faints nor is weary. There is no searching of His understanding. He gives power to the weak, and to those who have no might He increases in strength. Even the youths shall faint and be weary, and the young men shall utterly fall, but those who wait on the LORD shall renew their strength; they shall mount up with wings like eagles, they shall run and not be weary, they shall walk and not faint.” Isaiah 40:28-31

I have to smile when I read that last part… they shall run… they shall walk. Today those words have to be specifically for my dear friend. You see, she’s on crutches. And her God wants her to know He sees her. He is telling her that not only will she walk, but she will run. And may we all run. As we wait on Him, may we be expectant! As we wait on Him, may we have hope! And may we endure… because He will provide the strength.